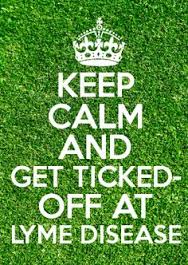 It’s that time of year again.

Nearly every day, I receive messages from people frantically seeking advice after finding ticks on themselves or their children.  What’s their next steps?  I know they are terrified of winding up like me.  I’ve made my story so public; complete strangers are now aware that a tiny tick bite can destroy your life.

With this blog, I’ve always had the same purpose.

With those goals in mind, this is the first in a four-part series on Lyme disease.  For some, this will simply be a review.  For newer readers, this may save your life.  I vowed from the beginning that there must be some good in the hell I’ve been through over the last two years.

This is the good.  Teaching you.  Helping you.  Maybe even saving you.

Part #1 — I already know about Lyme disease, and it’s not that big of a deal.

That’s what I used to think, too.  I remember my mother “checking my head for ticks” and occasionally pulling one off my body, but that was the end of it.  Ticks were gross, for sure, but I was completely clueless at how deadly they could be.

According to the CDC, it is estimated that there are at least 300,000 new cases of Lyme disease every year.  To put that in perspective, there are more new cases of Lyme each day than all types of cancer combined.  That makes you listen up, doesn’t it?

If caught early, Lyme disease can be treated with one or two rounds of the antibiotic Doxycycline and, generally, all symptoms are resolved.  However, many patients are like me –unaware of the bite.  By the time treatment began, I had been infected for over four months.  My first symptoms were extreme fatigue, shortness of breath, passing out with any exertion, and severe chest and back pain.  I was admitted to the cardiac unit of our local hospital with tachycardia.  If I stood, my heart rate climbed to 200 bpm; sitting, it plummeted to 38.  I was scared to death.  So scared, in fact, I had my attorney draw up a living will and medical power of attorney.  I felt like I was having a heart attack.

The CDC claims that only 1% of Lyme victims suffer from Lyme carditis.  I think this number is significantly higher in reality.  For weeks, I was in and out of the hospital with test after test being ran in a desperate attempt to figure out what was wrong with me.

To the doctors, I was a fascinating case.  I just wanted to go home and return to my normal life.

My doctor had a resident at the time who was particularly interested in my unusual case.  She would stop by my room late at night and we’d talk.  Like I said, my symptoms were fascinating.   She convinced my doctor to run a Western Blot, which is the test for Lyme disease.  We do not live in an endemic area, supposedly, but he humored her, allowing her to run the test.  It’s important to note that this, the only CDC-approved test for Lyme, is only 55-65% accurate.  With today’s technology, this is an unacceptable embarrassment.

Nonetheless, the test came back positive.  After consulting an infectious disease specialist, my doctor feared the results were a false-positive and he ran the test again.  Meanwhile, I endured a lumbar puncture to rule out meningitis.  The next day, the second Western Blot came back positive once again and Lyme spirochetes were visible in my spinal fluid.  Lyme had infiltrated nearly every system of my body.  It was in my tissues, my joints, my brain, my heart.

After almost two months of testing, I was relieved to finally have a diagnosis.  I had no idea that this was just the beginning of a long, painful journey.

Since that diagnosis, I have been on more than thirty prescribed medications.  I’ve had a PICC line and now a chest port to provide access for IV antibiotics.  I’ve taken dozens of supplements and homeopathic medications.  I’ve changed my diet to eliminate gluten, sugar and dairy.  I’ve been hospitalized five times and received treatment in the ER eight times.  I’ve gone from a wheelchair to a cane to walking on my own again.  I have seizures, headaches, severe joint pain, and facial palsy.  I require so many more hours of sleep than the average person, yet I still wake up tired.  I gained 50 pounds in the beginning, largely from the steroids, and then lost 60, largely from dietary changes.

I am just now able to be an active participant in my life and the lives of my children again.  I have to plan ahead for activities, resting for days before important events and sleeping for hours after, but at least I am part of life again.  My cognitive issues, fatigue and chronic pain forced me to resign from my teaching position, which was one of the hardest things I’ve ever had to do.  I never thought I would have to retire at the age of 39.  I deal with a lot of anger and depression over all I’ve lost due to this mean illness.

I grieve daily for the life I once had, and I work with a therapist to accept my new world.

Still, even with all this ugliness, there has been good.  I am a more appreciative person, acutely aware of my blessings.  I no longer take things for granted.  Lyme disease forced me to slow down and appreciate the little things –being able to submerge my whole body underwater when my chest port isn’t accessed, feeling well enough to hold Izzi’s hand during her school field trip, cooking a meal for my family.  I have kissed Death on the cheek, and in doing so, I now embrace Life wholeheartedly.  I have good days and bad, but even if this is as good as it gets, I can live with it.

Because my treatment started too late, I have chronic Lyme disease, which means I will most likely combat these symptoms for the rest of my life.

I tell you my story, the shortened version, to validate this series.  My story is important.  My pain is necessary  to save you from the same.  Now that you are aware of how serious Lyme disease can be, I hope you return to A Broken Crayon for the next post, in which I will discuss how to be proactive, protecting yourself and your loved ones from ticks.